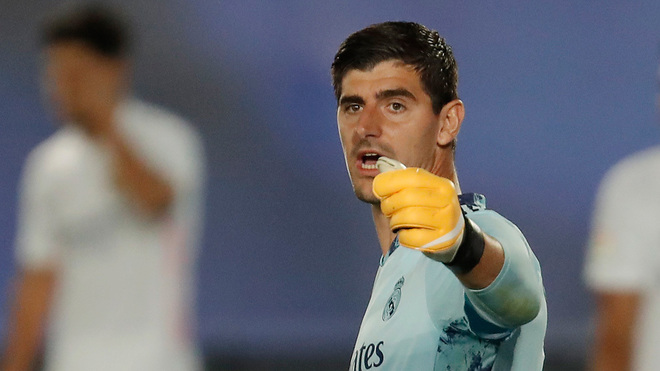 Thibaut Courtois is fully focused on what is sure to be a difficult month for Real Madrid. The Spanish champions return to Champions League action next week, with the season's first Clasico against Barcelona also taking place at the Camp Nou.

Real Madrid have started the LaLiga Santander season in fine form and sit top of the table at these still early stages, but Courtois knows that there is still a long way to go and that starts with a tough October and November schedule.

"It's a month of important games," Courtois said as he accepted an award as Mahou Five Star Player for the month of September, while also crediting his teammates for Real Madrid's good defensive record.

"It's the work of the whole team and I hope that I can continue to help us win games. It's important to keep a clean sheet, but it's also important to score goals and win the games we play.

"We're doing well physically and with our results, which we hope to continue over the next month."

Courtois kept two clean sheets in three games in September, which saw him voted player of the month at Real Madrid.

The Belgian endured a tough start to life at Real Madrid after joining from Chelsea and spent his first season at the club battling with Keylor Navas for a starting place.

The Costa Rican's sale to Paris Saint-Germain allowed Courtois to rediscover his confidence and best form again though, and he played a pivotal role in Los Blancos' 2019/20 LaLiga Santander title win.

In 34 LaLiga Santander appearances across 2019/20, Courtois conceded just 20 goals. Impressively, the Belgian managed to keep as many as 18 clean sheets, which was enough to see him win the Zamora Trophy, preventing Jan Oblak from winning it for a fifth consecutive time.