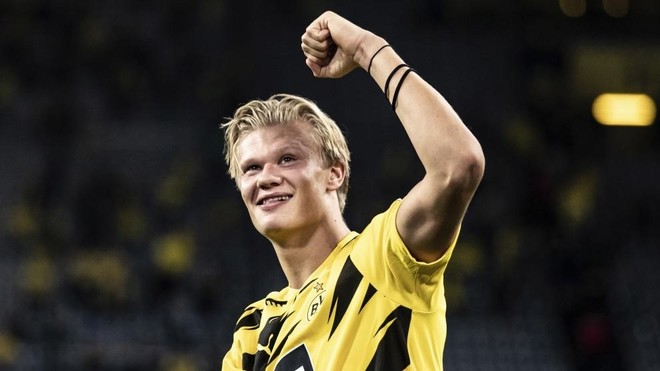 Erling Haaland continues to amaze everyone, starting from when he burst onto the scene back in 2019 for Red Bull Salzburg. Since then, he has made the move to Borussia Dortmund for 20 million euros and boasts an impressive goalscoring record of 21 goals in just 23 appearances.

The 20-year-old is also performing well for his country, scoring a hat-trick for Norway in their Nations League tie with Romania on Sunday. The scintillating form the striker finds himself in has alerted teams that are in search of a new No.9, most notably Real Madrid.

Real Madrid have scouted and have been interested in Haaland for a few years now, even before his time at Red Bull Salzburg, when he was playing for Norwegian outfit Molde. Even scouts at Los Blancos have admitted that Haaland's explosion onto the scene has come prematurely and acknowledge that he is the only player that would be able to overshadow French striker Kylian Mbappe.

It has taken the youngster just a year and a half to become one of the world's best strikers, and after being at Dortmund for just half a season, many were thinking that his time in Germany could be over this summer. But due to the economic crisis caused by the COVID-19 pandemic, teams could have been priced out of a move for Haaland.

Are Real Madrid looking for a No.9?

Acquiring a new striker has been a priority for many seasons now. with Karim Benzema needing a partner in attack and Real Madrid needing a long-term replacement for the French striker. Both Luka Jovic and Mariano Diaz haven't earned Zinedine Zidane's trust and after the way that he has started the season, Haaland would be a perfect fit.

Is the arrival of Haaland compatible with the possible plan of buying Mbappe in the future?

It's true that both players are chalk and cheese and have their own style of play. Haaland looks for balls in the area, while Mbappe needs space to run in to.

PSG won't let their star leave quietly, even if he doesn't renew his contract with the club, leaving just a year until it expires in 2022.

There is no denying that Real Madrid are keen admirers of Mbappe, but before talking to PSG, Los Blancos want to keep tabs on the evolution of players such as Vinicius Junior, Rodrygo Goes and Eden Hazard.

Despite only being at Dortmund for 10 months, Haaland is setting the world on fire with his immense pace and ability to score goals. It would only take 75 million euros to trigger the release clause in his contract and make him a Real Madrid player, but the club wouldn't entertain that as they believe they have an excellent relationship with Dortmund, following the sale of Achraf Hakimi and the loan of Reinier. They believe they could get the striker for a lower price, too.

Communication between the two clubs is said to be constant and those upstairs at the Estadio Santiago Bernabeu are aware of any player that may leave the German club.

Many at Real Madrid are more and more convinced that Haaland would be a fantastic fit for the club and would solve many of Zidane's problems, which have largely centred around the lack of goals in the squad.