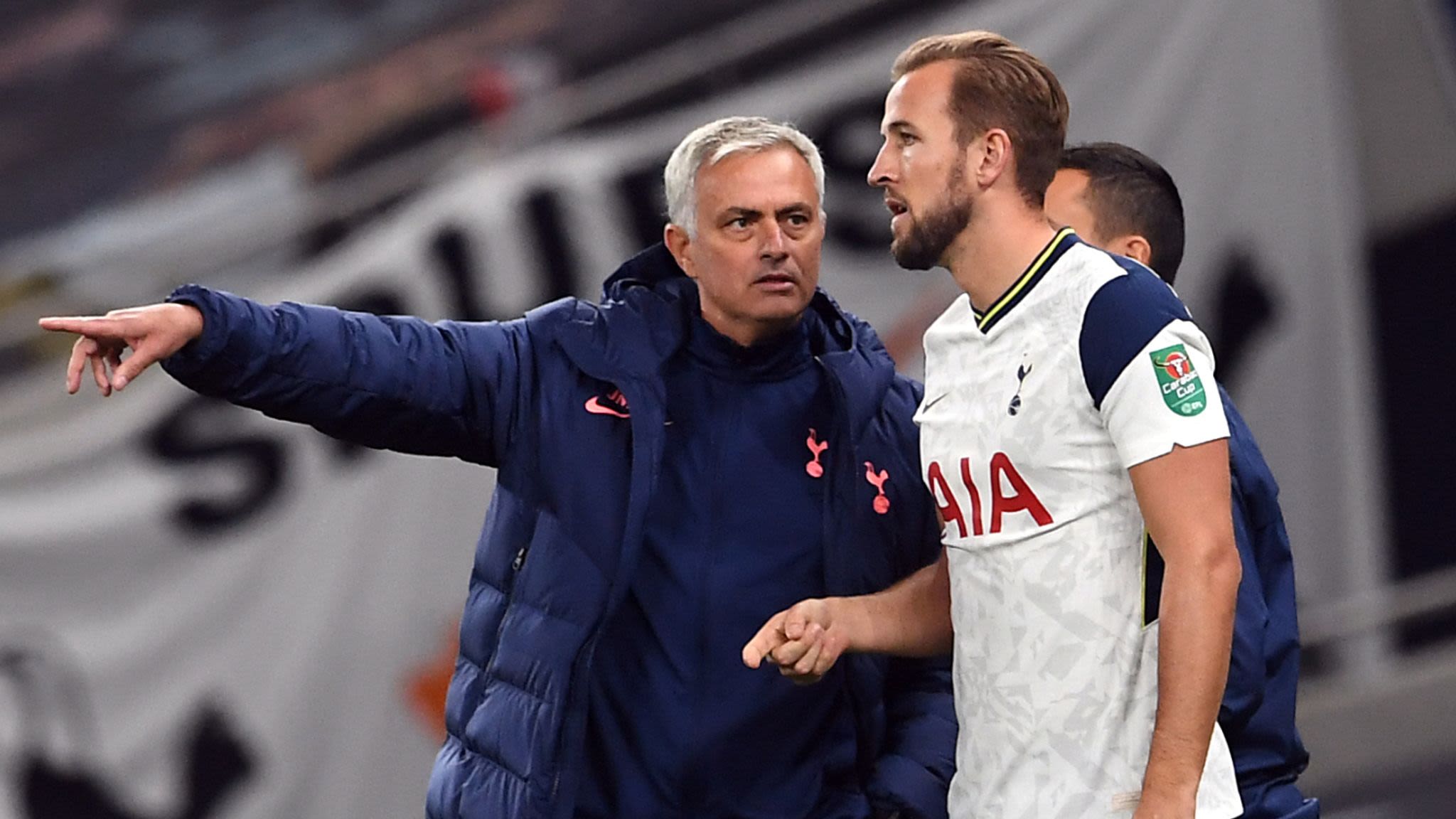 As he put it, he began “wearing the pyjamas” of his new club. The 12 months since have given him plenty of sleepless nights. But now he’s happy that progress is being made. Spurs were 14th in the Premier League table when Mourinho walked into the club, with them having managed only 14 points from 12 games. Today, ahead of Saturday’s match against Manchester City live on Sky Sports, they are second, with 17 points from eight games.

To mark the anniversary, Sky Sports News reporter Gary Cotterill sat down with Mourinho, bringing along some original images created by lifelong Spurs fan, and world-famous artist, Paul Trevillion. He’s probably best known for “You Are The Ref”. This is his take on Mourinho: “You Are the Boss.”

After beating West Brom last time out, Tottenham went top for the first time since 2014. It didn’t last long, just a couple of hours, but that was enough time for Jose to post a video of himself on Instagram, doing a little jig.

"We started the Premier League losing [a 1-0 defeat at home to Everton] and that didn’t affect our stability and our belief which is a very important thing.

"During the season we are going to lose many times, and it’s very important to have that belief, that stability, that maturity.

"We are living a good moment. We don’t have important injuries, we are playing well, and we are winning matches."

Kane is 65 goals behind Jimmy Greaves, but is still only 27.

"He has so many years to play so I don’t think it’s a problem. It’s just a question of time. When, is the only question."

Kane’s scintillating form comes only a few months after Paul Merson expressed big doubts that he could thrive in a Mourinho side. So, is it satisfying to prove a critic wrong?

"I was never worried about it. I knew the quality of the player, I knew I had a plan for a certain style of play. We discussed it a lot internally. I, Joao [Sacramento - assistant head coach] and the analysts knew Harry wouldn’t have any problem in a team like ours, so for us it was never a question."

The image above depicts the moment Kane limped off at Southampton’s St Mary’s stadium with a left hamstring injury on New Year’s Day. It was a big loss, at a time when Tottenham were already suffering several serious injuries.

Heung-Min Son would be added to the casualty list seven weeks later.

Liverpool are experiencing a similar run of injuries this season. Similar, but no way the same, says Mourinho. His crisis was up front, Liverpool’s is in defence.

"It’s difficult to compare because [for us] it was an accumulation of injuries all in the same position and I used to say that strikers and goalkeepers are the ones you cannot replace because if you lose a right back you will have a centre back who can adapt there," he says.

"Goalscorers no chance. You don’t have a left back that’s going to play striker. So, when we lost Harry and Sonny, the team was in a situation where we had no chance."

And so, to the blanket…

Amid Tottenham’s injury setbacks, Jose used a blanket metaphor to describe the limitations of his then squad.

"It’s like when you have a blanket in your bed and you push the blanket and the feet are out and you have cold feet, then you cover your feet and half your body is outside the blanket," he said in February.

"We have a very good squad. Of course, there are other top squads in the country and clubs with an advantage in relation to us, but I’m really happy and I think we can do good things. I love my group!"

Mourinho believes Gareth Bale’s experience of winning things could be a big factor in the push for trophies.

"It’s important if the others embrace that experience and know-how and if they cope with the level and the consistency that to win things you need to have,” he says.

And he believes he’s seeing signs of just that.

"I like the way my squad is growing up. I like the way they reacted to the defeat against Everton and the ‘defeat’ against West Ham," he says.

"I like the way we are coping with the negative things. But I know it’s also very important the way you cope with the big moments. I love the way my team behaved after the 6-1 at Old Trafford.

"I love the way the team behaved after being top of the league, even for a couple of hours!"

This image of Jose as a schoolboy was drawn by Paul Trevillion to illustrate his kindness to the ball boy Callum Hynes.

After Callum’s quick thinking led to a goal for Harry Kane against Olympiakos, Mourinho took him to meet the whole squad ahead of their next match.

"It’s just something natural with me," he says. "My fragility is kids and old people."

That fragility for old people showed itself during lockdown, when Jose volunteered at food banks.

But, back to kids, or more specifically youngsters and Mourinho’s willingness to give young coaches a chance. To promote ex-players to the coaching staff. Michael Carrick at Manchester United. And now Ledley King at Spurs.

"I believe in club culture. Club culture is something you have to understand, you have to feel. So, to have one assistant with that culture helps. I worked with Ledley a few times. He was in the Academy and coming to us with young players," Mourinho explains.

"We went to him a few times for a couple of meetings, and we understood at an early stage that he would be the club man to join us. He is helping us, but we are also helping him grow up as a coach and feeling motivated and challenged by our level.

As usual, Mourinho refuses to entertain any talk of a bitter rivalry between the two. "Not at all. I keep saying this, not at all," he insists when asked if beating City would be extra special.

“I just want to get to 20 points after the match.”

A result like last season would suit Mourinho very well. Spurs beat City 2-0, and soon after Jose got himself a very short - almost Pep style  - haircut, as drawn by Paul above. So is he superstitious? Will he get another No 1 trim if Tottenham win this time?

"Not at all. I am totally the opposite of a superstitious guy," he laughs. "In football so many people live depending on routines and doing always the same thing if you win. I am the opposite. I just simply don’t care about it."

As for City, he says it will be a tougher game this weekend than it was in February.

"I think they are more difficult now than before. When we played them, Liverpool were (already) champions, so playing for a few months knowing this, I can imagine they were missing that ambitious factor," he says.

"Now is completely different. Now the league is totally open. It looks like they are six points behind Leicester but they are not. They have one match in hand, so Manchester City are a very important horse in this race to the title."