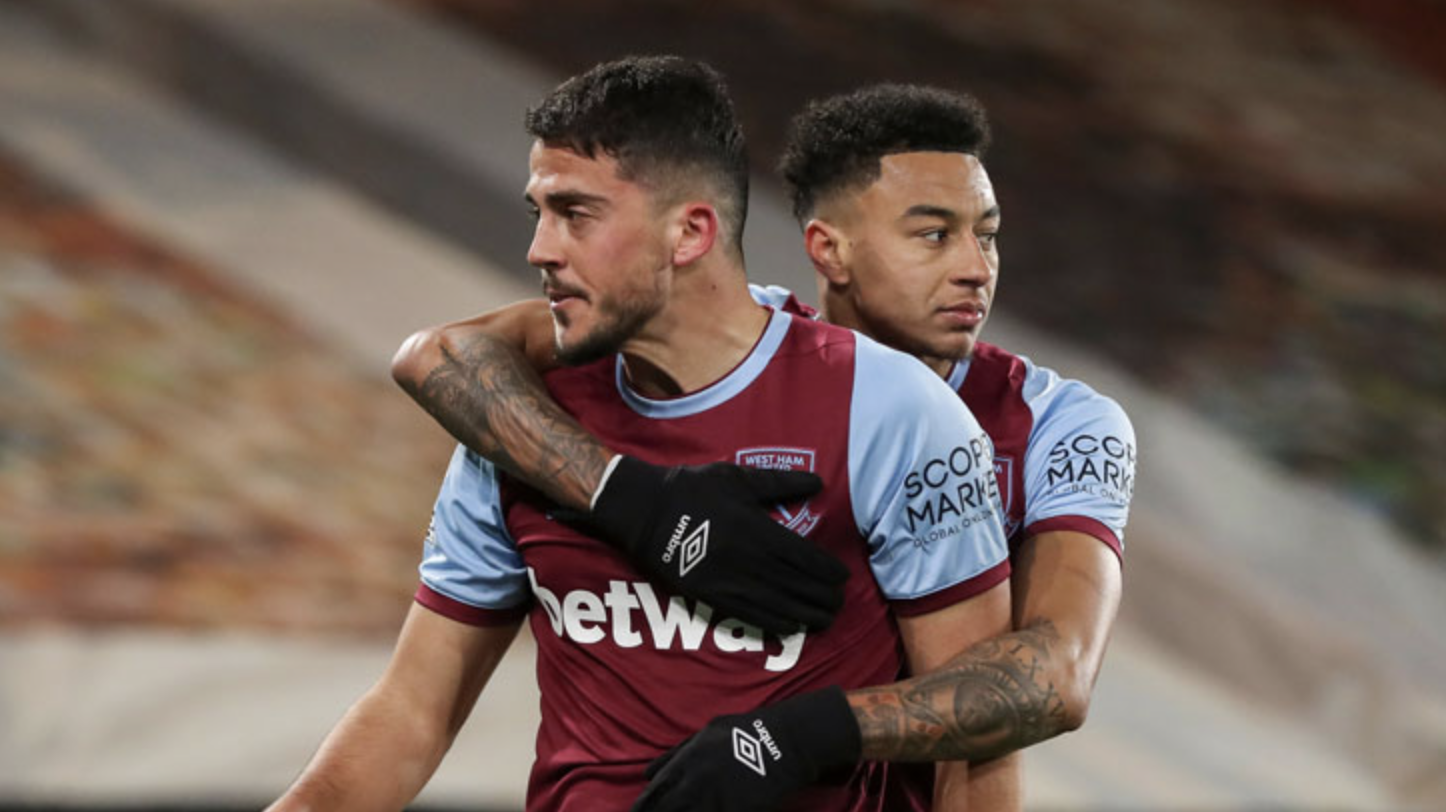 West Ham moved into the top four of the Premier League after holding on for a nervy 3-2 victory against Wolves at Molineux.

With plenty of the sides around them dropping points this weekend, it felt like a real opportunity for David Moyes' side as they look to secure European football for next season.

And it looked like one they would take as goals from Jesse Lingard (6), Pablo Fornals (14) and substitute Jarrod Bowen (38) saw them race into a three-goal lead inside the first 38 minutes.

However, Wolves grabbed a lifeline just before the break through Leander Dendoncker's header (44) before substitute Fabio Silva's smart finish set up another nervy finish for West Ham, who squandered a three-goal lead to draw 3-3 with Arsenal before the international break.

On this occasion, Moyes' men held on for what could be a crucial three points in the race for the Champions League places.

Victory sees the Hammers jump above Liverpool, Tottenham and Chelsea into fourth on 52 points, four points behind third-placed Leicester with eight games remaining. Meanwhile, Wolves stay 14th after a 13th defeat of the season.

West Ham raced out of the blocks as in-form Lingard opened the scoring in stunning style after six minutes.

Collecting the ball 10 yards inside his own half, he powered towards goal, breezing past Romain Saiss before producing an ice-cool finish to beat the onrushing Rui Patricio.

Man of the match: Jesse Lingard.

The Hammers extended their advantage eight minutes later and Lingard was heavily involved again. The England international brilliantly kept the ball in play, knocking it around Nelson Semedo, Arthur Masuaku crossed for Fornals to steer home into the bottom corner.

West Ham were dealt a blow just after the half-hour mark when Michail Antonio, who had run the Wolves defence ragged alongside Lingard, was forced off through injury. However, it didn't knock Moyes' side off their stride as Bowen - who had only been on the pitch two minutes after replacing Antonio - made it 3-0 seven minutes before half-time after another swift counter-attack from Lingard.

For the second Premier League game in a row West Ham had a three-goal advantage in the first half, but just as against Arsenal, they conceded just before the break. Adama Traore went on a blistering run down the left before standing the ball up for Dendoncker, whose header gave the hosts a lifeline.

Wolves threw on Silva at the break in place of Daniel Podence as they tried to claw their way back into the game further, but it was West Ham who thought they had extended their lead just before the hour mark.

Patricio could only palm Bowen's powerful shot into the path of Tomas Soucek, and the Czech midfielder turned the ball into the back of the net but only after bringing it under control with his left arm, which was correctly spotted by referee Michael Oliver.

The West Ham nerves were jangling once again with 22 minutes remaining as Silva, who was played in by Pedro Neto's inch-perfect through ball, struck past Lukasz Fabianski and into the far corner.

But this time around, the Hammers made sure the comeback was not completed as they held off Wolves' fightback to claim what could be a crucial win.

What the managers said…

Wolves boss Nuno Espirito Santo: "Not a bad game. In possession we started well, but we were very poor in defence. There were players running 30, 40 metres and it takes away from all the good things we did in attack.

"When you don't have the same players, everything is not the same and it becomes harder. The reaction was good, but we started very bad. Conceding three goals against a top team like West Ham makes it very difficult to reverse the result."

On injuries: "It has been a test all season long - not only for us but all teams. It is testing us and making us find solutions to finish the season well. But it has been a tough test."

West Ham boss David Moyes: "For a manager it is torture [game like that]. Scoring three last week and three this, unfortunately conceding a few as well. It was really open. Both teams could have scored more.

"It felt like deja vu. We didn't manage it too well. We were going to try and make it four instead of settling for 3-0 at half-time. Some of our play in the first half was scintillating. Jesse [Lingard] was fantastic. Michail Antonio played as well as he has for a long while for 30 minutes. We're not sure on the injury. We will assess it tomorrow. It looks like he's felt his hamstring."

On the race for top four: "We have to go and take it on. Why not? I am hearing pundits talking about West Ham having a chance of Champions League. Nobody would have envisaged or mentioned that last season. Can we keep it going? We are going to try and compete with the big teams right until the end."

Man of the match - Jesse Lingard

"He does an incredible amount of running. It's what he does. He's good out of possession and good in possession. At Manchester United because there is that expectation of what you need to be to be a wide player there, he's always going to get a difficult press.

"He's a really good player. He's going to have a great career. Manchester United have sent him out to West Ham to boost his career, maybe with the thought of boosting his price-tag, but they might be thinking, 'actually, we might want him back, he could be a real help to us'."

'We are ready for top-four battle'

"It was a tough game. We had to work hard. We kept at it. I thought it would be another Arsenal, conceding just before half-time. But the lads kept their focus. We come out second half a bit better. It was about managing the game."

On his goal: "It was two versus two and we work on that in training, Michail took a man away with his run. There is always room for improvement. It is a great victory and we take the positives."

On his good form: "It is consistency. I have not played much in the last two years so to play week in week out is good. The team help me."

On race for the top four: "It is about maintaining and keeping focus. We have tough fixtures, but the lads are ready."