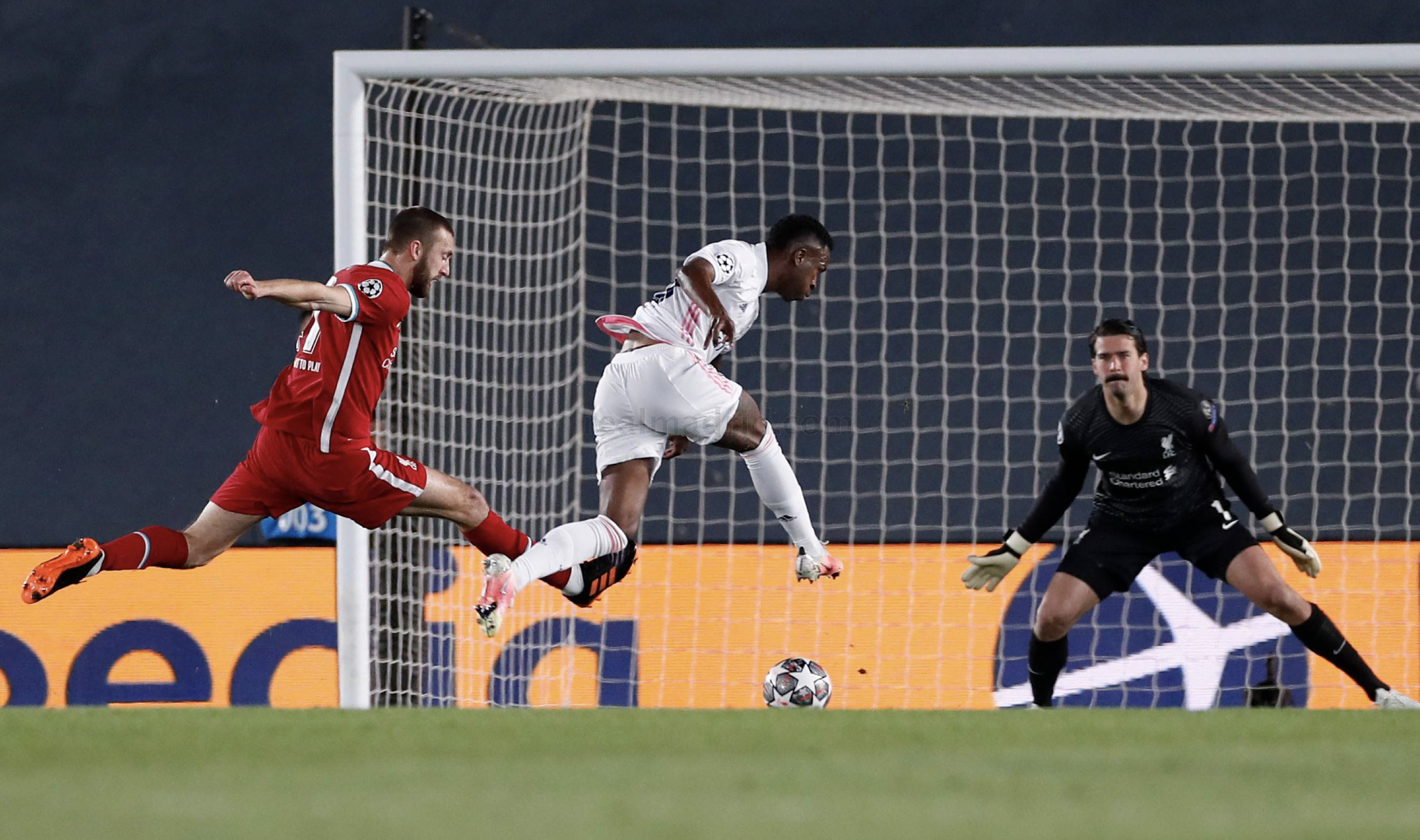 Madrid were the more vibrant from the off and Vinícius Júnior served warning of their intent with an early header wide. The forward made no mistake with his next chance, firing past Alisson Becker after latching on to a raking Toni Kroos pass.

Another Kroos crossfield ball helped set up the second, Trent Alexander-Arnold's header back falling short of his goalkeeper, allowing Marco Asensio the opportunity to clip the ball past Alisson Becker and tap into an empty net.

Jürgen Klopp's side improved after the interval with Mohamed Salah drilling in off the bar to reduce arrears but their defence could not hold back Vinícius Júnior, who swept home his second to give the Merengues a two-goal cushion ahead of the return.

"His actions always created danger. Both his control and finish on the first goal were perfect and his second goal too."
Ginés Meléndez, UEFA Technical Observer

What is it about Madrid and this competition? Missing a couple of key players, no problem. They outclassed Liverpool from start to finish and, truth be told, they might have taken more than their 3-1 advantage to Anfield next week, such was the gulf in class between the teams. Brilliant, brilliant work from Zinédine Zidane and his boys.

For Liverpool, it’s a repeat of the scoreline in that 2018 final defeat in Kyiv. Like then, they’ll head home with regrets – their defending could have been better for all three goals. A more energetic second-half display brought an excellent team goal (from their sole shot on target), but the third conceded leaves them plenty to do back on Merseyside. They have recovered from worse defeats than this, but can they do it without the Anfield factor

Zinédine Zidane, Real Madrid coach: "It feels good and I'm very proud. We played well but we had difficulties at the start of the second half. We knew we could attack down the flanks, their full-backs are really attacking and things went well for us in that sense, Toni's quality was evident in the pass and Vinícius's pace was there for all to see. In the second half they had one shot and scored. It's tough to take, but that's football. The ball fell their way and that's that. These things happen. I'm happy with how my boys played."

Thibaut Courtois, Real Madrid goalkeeper: "It was a good game for us, especially the first half. We controlled them well and scored two goals. The second half they started with higher intensity and got the goal but we tried to remain calm and we got the third. It's a good position for us now but we know Anfield is always a hard place to go."

Andrew Robertson, Liverpool defender: "We didn't start great. There was space for us to play but we kept giving the ball away cheaply and we got punished for that. We conceded two poor goals but then steadied the ship a little bit. We started well in the second half, got a goal back, but then we opened the door at the back. We didn't deserve anything from tonight but we've got an away goal and we will see if that can be crucial but we will have to play better than tonight."

• This is the first time Vinícius Júnior has scored two goals in a game for Real Madrid.

• It is now seven consecutive matches between Real Madrid and Liverpool in UEFA competition in which the team scoring the first goal has gone on to win.

• Mohamed Salah has scored in four successive games in the competition for the first time.

• Seventeen of Liverpool's last 18 goals in all competitions have been scored in the second half.

Madrid have the small matter of a home game against Barcelona on Saturday with both teams still in the mix for the Spanish title, while Liverpool host Aston Villa as they aim to climb back into the UEFA Champions League spots in the Premier League. The second leg of this tie follows on Wednesday 14 April.