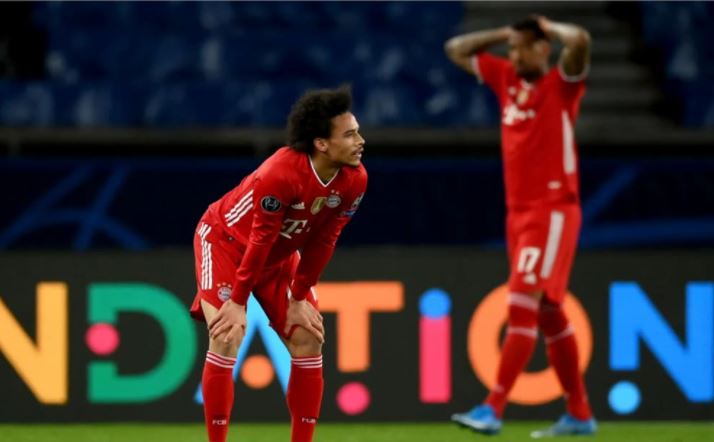 Paris made amends for last season's final defeat by eliminating holders Bayern in a nerve-shredding night at the Parc des Princes.

This game carried on from where the first leg left off with both sides storming forwards whenever possible. Paris created the better early openings with Kylian Mbappé going close and Manuel Neuer thwarting Neymar twice.

The Brazilian's luck was really out when he struck the post twice in three minutes and Bayern duly capitalised as Eric Maxim Choupo-Moting nodded in the opener after Keylor Navas had parried David Alaba's drive.

The pattern continued after the break. Neymar failed to touch Ángel Di María's pass in from close range but, crucially for Mauricio Pochettino, the Paris defence strengthened their resolve and rarely looked like conceding.

Leroy Sané dragged Bayern's best chance wide as they searched in vain for the second goal that would have sealed a dramatic turnaround for the holders.

Player of the Match: Neymar (Paris)

"All the dangerous chances for Paris came from his individual talent. He was particularly dangerous in any one-on-one situation – a special talent."
Patrick Vieira, UEFA Technical Observer

And breathe. This was entertainment of the highest order between two sides of such delectable ability. In contrast with the first leg, Paris were the team guilty of spurning opportunities – with Neymar guiltiest of all – and that failure to put the ball in the net allowed Bayern to keep dreaming. Crucially, the French champions withstood the pressure after falling behind, suggesting they have learned from previous collapses. Still, it was nerve-racking all the way.

A depleted Bayern go down fighting after 180 minutes of breathtaking UEFA Champions League football. The holders rode their luck at times on the night, but will travel back to Munich knowing they had it in them to reach the semi-finals. Ultimately, they paid the price for their first-leg mistakes; if you don't take your chances, you can't expect to go through.

Neymar, Paris forward: "I'm very happy. We played a great team and we're a great team. We've eliminated the champions of Europe, we're in the semi-finals and we'll have to work even more. We're a real team and we have to congratulate everyone."

Mauricio Pochettino, Paris coach: "We were very focused. It was a really tough match – I'm really happy because the players deserve big credit. To win and qualify for the semi-finals is an amazing moment for us."

Manuel Neuer, Bayern goalkeeper: "We weren't eliminated tonight – the result in Munich needed to be better. That was frustrating because we missed so many chances. We're on our last legs. It's tough against such a top side but the players gave everything."

Hansi Flick, Bayern coach: "You saw how dangerous they are in attack. I have to pay huge compliments to my team, even though Paris progressed. As a fair loser, I would like to congratulate them. Normally, my team has so much quality in the final third but today they were lacking that final punch."

• Paris have won 17 of their 18 UEFA competition ties when recording a first-leg away victory.

• Paris have only failed to score in two of their last 45 UEFA Champions League matches – both against Bayern.

• This was Bayern's 100th game in the UEFA Champions League knockout phase. They are just the second club, after Real Madrid, to reach the milestone.

• Bayern have scored in their last 22 UEFA Champions League matches. The last time they failed to register was against Liverpool in February 2019.

• Bayern extend their record for the longest unbeaten away run in the UEFA Champions League to 18 games. Their last away defeat was a 3-0 loss versus Paris in September 2017.

Paris host St-Étienne (18 April) and travel to Metz (24 April) in their next Ligue 1 games as they look to overhaul leaders LOSC Lille, who are three points clear. The UEFA Champions League semi-final ties are scheduled for 27/28 April and 4/5 May. Bayern, who are five points clear of Leipzig at the Bundesliga summit, must now focus on their hunt for a ninth successive title.